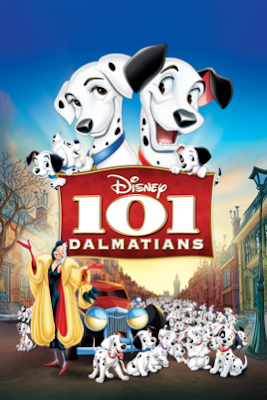 If there was one Disney sub-genera to contend with the amount of Disney Princess films … it would be their cute-pet centered movies. Certainly not as marketable, but still just as long lasting, and some of which have remained staples of the animation company. The one classic under this category which has endured and grown the most over the years is the 1961 animated classic “101 Dalmatians”. Upon it’s release it was a monster hit at the box office, one of the studios most critically successful, and even Dodie Smith, the author of the original book called this version an improvement over what she initially wrote. Speaking personally … I think the movie is okay, not bad by any means, but certainly not a favorite. Even on the scale of cute Disney pet-themed movies, I can’t bring myself to say I like this as much as most of the others. It just seemed to lack certain highlights that made films in the vain of “Oliver and Company” stick with me. Also, in a rare case, all my childhood fondness for “101 Dalmatians” revolves around the live-action remake, as that was the version I grew-up watching as a kid. Still, the original is good … in fact, I think it’s a little better than some might give it credit for. While I can’t sing the films praise as one of my favorites of the Disney animation collection, I can still give credit to a good movie when I see one. 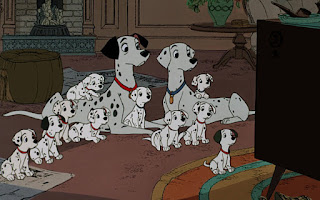 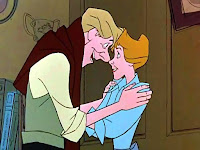 Adapted from the book “The Hundred and One Dalmatians” by Dodie Smith … Our story begins with a Dalmatian named Pongo, who’s wanting more than a boring bachelor’s life, while his owner Rodger is too content in his narrow-minded view of composing music. 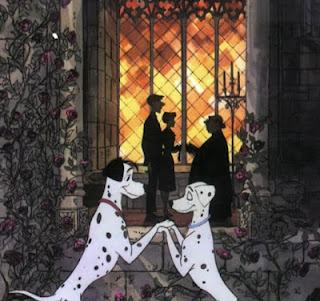 Watching this as an adult, I find myself relating to Rodger more than any other character, as I too had a problem of being so fixated on my passions, that I often forgot to look out for people to invite into my life … thank goodness that’s changed. Anyway, Pongo catches the eye of another female Dalmatian with and equally lovely owner, and instantly he begins to set a plan to have both owners meet in the park. This whole sequence with Pongo getting the two owners to notice one another is honestly my favorite scene of the whole film, and when it wraps-up with the two becoming an item … it just puts a big dumb smile on my face. Time passes, both Dalmatians have had a litter of pups, and all seems right with the world … until she shows up. In comes one Cruella de Vil, a fashion obsessed nut-case with a special liking for fur coats, and she sees this particular group of pups as the perfect means for making a new line of spotted fur coats. When Roger turns down her offer to pay for them, the villain resorts to stealing them for her own end. Thus, the dog Pongo and his wife Perdita set out on a quest to rescue the pups, before a new line of coats go on the market. 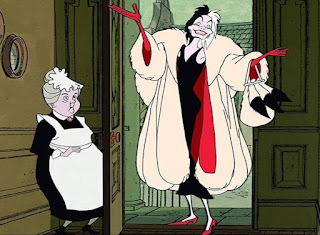 Let’s just jump right into the most famous thing about this movie … the Villain. Cruella de Vil has gone on to become an icon, not just for Disney Villains, but I always see her on just about every classic movie villain list out there. It’s one of those rare cases in which a recognizable cartoon villain just took on a life of their own, and grew into something more famous than even the animators were expecting. Her motivations are so simple, yet so horrible that we find ourselves hating her more than the really evil villains with the world dominating motivations. She also has a great design, as she’s this fragile skinny person who’s almost swallowed up by this monstrous fur coat. Once again for me personally, I always felt that the animated Cruella de Vil loomed in the shadow of her live action counterpart played by Glenn Close, who’s still to this day one of my favorite live-action Disney villains. Still, you can’t dismiss the original, and voice actress Betty Lou Gerson dose a great job hamming it up. Let’s not forget the equally famous “Cruella de Vil Song”, which has likewise become a Disney staple. Being honest, I never understood the mass appeal of this song, or why it’s so popular. Sure, I remember it, but I don’t think it’s really that catchy or fun to listen too either. I do however enjoy her two cronies named Jasper and Horace, who set the template for wicked goons that come in the pair of a tall skinny guy, and a short fat guy. Beyond that, these two are so overly British with their slang remarks, and thick accents … I just love it. 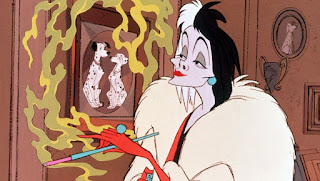 My favorite character … oddly enough, is this one cat named Tibs, who’s just a small side character, but there’s something about his determination and resourcefulness that makes him stand out. We see him put his life on the line to protect the pups, and it’s great … how often do we see a cat protecting dogs anyway? The remaining characters all play their parts fine, and are likable … but none too memorable either. Pongo and Perdita do make for a lovable Disney couple, and it’s cool for once to see a husband and wife set off on a quest together to rescue their kids. Then we have the Dalmatians themselves, who are all very cute, but with so many, the film can only give us little glimpses of the individuals in the group. I remember watching this as a kid, and I so badly wanted to see more scenes with certain pups. Because of this, my sibling and I always preferred watching Disney’s "The Aristocats", as that film only had three kittens, each with distinct personalities, each given their proper length of screen time, each with quotable lines, and they just left more of an impression on us as memorable characters. 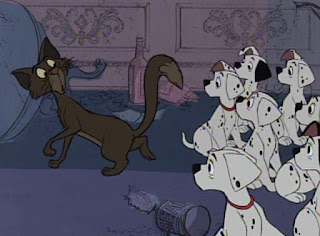 While the film may look kind of basic on the surface, the film actually marked a big change in animation that had never been done before ... a little process called Xerography. This allowed the animators to copy their characters into the film without the whole inking process, and it saved the studio a lot of money. Especially with all the Dalmatians on screen, it saved a lot of time and cost to re-use the same drawing of a dog character in a single frame. As far as individual animation highlights are concerned, one of my favorite scenes, strangely enough … is actually the opening credits. Most Disney movies of the time seemed to have the exact same, by the numbers, opening title card sequence, but “101 Dalmatians” begins with something completely original, and features a distinctly unique design and layout. This also marked the very first animated Disney movie to be set at the exact same time-period of it’s release. It was the first-time seeing things like car-tunnels, or TV’s in Disney animation. I actually love the scene with the family watching TV, as it feels like a real lived-in moment, and too often I feel movies forget to just have moments like that. On that note, the TV becomes a character in of itself, with a gallery of distinct TV programs and adds. For whatever reason, there’s nothing in this movie more memorable to me then that “Kanine Krunchies” add, with that annoying yet delightful jingle. 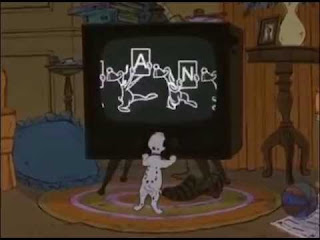 This dose lead me to one issue I have with the film … a noticeable lack of songs. Yeah, aside from that silly jingle, and the famous villain song, there really isn’t anything else musically related to look forward to. There’s the final “Dalmatian Plantation” song, but that’s nothing too special either. Say what you will about either “The Aristocats” or “Oliver and Company”, but those films absolutely had their musical highlights that kept bringing me back. Now with that said, the lack of songs is compensated with some rich atmosphere. I do love the quiet moments in which the music track is silent, and we just here the sounds. The Twilight Bark sequence is a great example of this movie choosing atmosphere over a song number, and it really works to create an effective mood. This scene also makes good use of character cameo’s from “Lady and the Tramp”. One thing I never quite understood was the films overly serious nature during some select scenes. When the Dalmatian mother is giving birth to her liter, we see the human owner treating it like a real child birth, right down to figuratively jumping at the drop of a hat. Also, when the puppies get abducted, we have the maid running out into the street screaming for help, followed by the event making the front-page paper. Maybe it was meant to be funny, but the scenes convey a quiet, serious tone, and don’t feel like attempts at hummer ... it's actually kind of jarring. 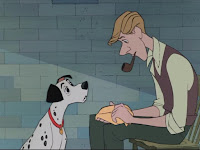 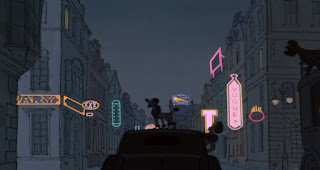 The third act of the movie is a subtle cat and mouse game, as our pups disguise themselves, and sneak aboard a truck. It actually builds some good tension, as the pups have to go in small groups, all while the villains might spot them at any second. Once their cover is blown, it leads into a memorable car-chase climax. Kind of a rare treat to get an action set piece of this sort in a Disney cartoon, and the animation on display once again was very inventive for its time. The cars for example were painted model objects, that were inserted into the animation environments. Also, I distinctly remember this chase scaring me as a kid all because of that one close up or Cruella’s psychotic angry face. 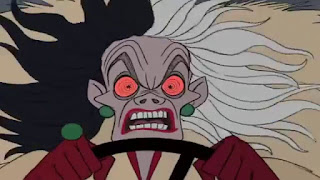 In the end, “101 Dalmatians” is one of those special little Disney movies that I feel sneaks up on me. Unlike most other Disney films, this one has never been a personal favorite, thus I don’t think about it. However, when I find myself watching it, I’m delighted to rediscover just how cute and lovable the film actually is. You really need to set certain expectations for a film of this sort, as it’s a cute little adventure with these adorable puppies out running a fun villain, and for such a simple premise, it somehow just works. It’s almost by default that it can’t measure up to other Disney films with more compelling characters, more songs and larger stories. Still, the film at least has its own charm factor and some rich atmosphere. It’s a movie to be taken for what it is … which is still a reasonably cute and delightful experience. 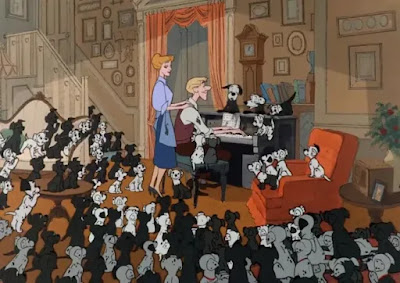