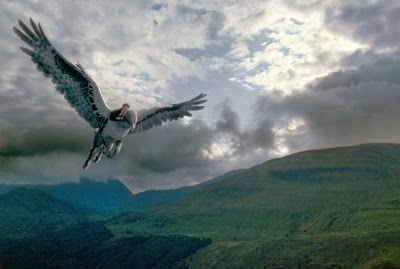 There’s one thing I love more than watching a cool sequence in movie and that’s experiencing a cool sequence in a movie. Not literally of cores, but when a scene is so heavy with atmosphere, music and thrills, you almost begin to feel like you’re there, experiencing the event that’s unfolding on screen, as opposed to just watching something on a screen. Personally, nothing engages my senses more than a flying sequence. When done right, these scenes have a power to lift you off your feet and submerse your mind into something that's truly simulating. So, in what might just be the strangest, yet, coolest top ten lists I’ve ever constructed, here are my top ten favorite flight sequences in movies.

10. Bike riding at night from “E. T. The Extra Terrestrial” 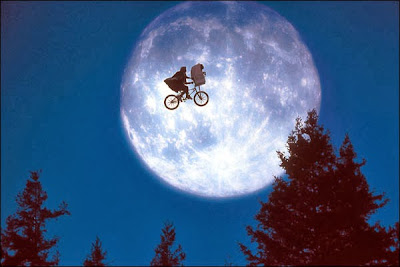 Of cores I had to include this one, this scene is so iconic and so classic that’s impossible not to have it on the list. Admittedly, it’s a very short scene, about a minuet long at best but it’s still a cinematic gem. The music is nice and of cores that shot of them flying in front of the moon is so timeless. It’s one of those wholesome scenes that allow you to take a moment to breathe and I love it when movies give you a minuet to just breathe. 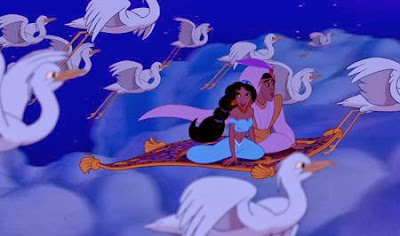 Now this a different kind of flight sequence. It’s not big on cinematography or spectacles, the same way many other flights are, but for obvious reasons, it’s still one of the greatest flight sequence ever seen in a motion picture. This musicale number is often regarded as one of the greatest in Disney history and while the song is romantic enough on its own, it's the presentation with our two lovers flying trough the clods and across the sky that really makes it feel all the more magical. On a side note, I just love all the different locations in this scene, from Arabia, to Grease, to Egypt, to China, they certainly cover a lot of places in one night.

8. Eagle Rescue from “The Hobbit: An Unexpected Journey” 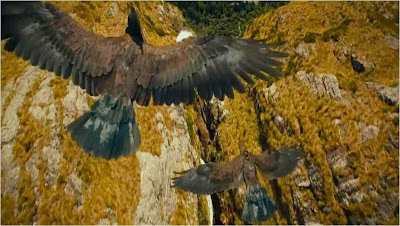 You’ll notice that a lot of the flights on this list involve giant eagles, that may seem a little repetitive but they all have their own unique strengths. Case in point, this awesome flight scene, which is actually the finally of the movie. After a flock of giant eagles rescue our hero’s from the villains, were treated to a breathtaking flight through a mountain range, with wonderful cinematography and the most simplistic musical score you could ask for. Plus, it’s such a spectacle to behold, when you have several giant eagles flying silhouette against a setting sun.

Now here’s a rather unique flight scene because unlike all the others, this one takes place in outer space. However, rather than flying around a black void with twinkling stars in the background, this film provides one of the most unique renditions of outer space that I’ve ever seen. With gaseous anomalies, colorful backgrounds, active environments and glowing blue angle creatures that fly around the ship. In this scene, which is so appropriately matched to the rock’ n good song “It’s my Time to Fly”, our lead hero gets a chance to pilot the space ship. What follows is a riveting flight sequence that’s absolutely worth including on the list.

6. The opening to Disney’s “Dinosaur” 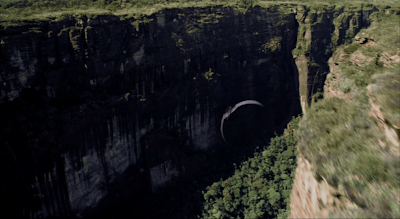 Talk about starting your movie on a high note. The opening of Disney’s “Dinosaur” is like a short movie in of itself, showing the life and struggles of various Dinosaurs. In this opening is a brief moment featuring a pterodactyl as it collects food for its nest. The flight sequence that follows is nothing short of phenomenal. The landscape, the musicale quire and the cinematography are all brought up on such a grand and epic scale, making this intro feel larger than life.

5. Flying the Golden Eagle from Disney’s “The Rescuers Down Under” 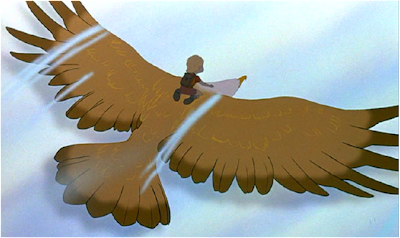 Okay, the eagle scene from “The Hobbit: An Unexpected Journey” was really cool, but honestly, it’s nothing compared to this. So what makes this eagle flight more spectacular than the one featured in that film, well, to be honest, there’s so much more going on in this scene. We have some awesome shots of the eagle flying through the sky but then we have some really unique moments involving water skiing, a dive off a waterfall and an intense drop from a mountain that really elevate this into one of my favorite animated scenes from any Disney movie. The backgrounds are great and the occasional first person perspective help’s simulate the whole illusion and feel of flight perfectly.

4. Buckbeak flight from “Harry Potter and the Prisoner of Azkaban” 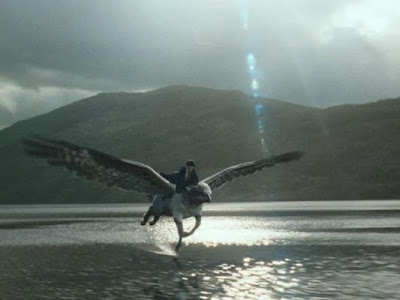 As far as sheer spectacles go, this flight may seem a little tame in comparison to some of the other flights on this list. However, this is still a personal favorite scene of mine because this is where I first fell in love with flight sequences. It’s a new class for Harry and his friends at Hogwarts school, and today’s class is all about a winged creature called a Hippogriff, nicknamed Buckbeak. During class, Harry gets the privilege to ride this creature, like many other flights featured on this list, this whole scene could have been cut out of the film for plot and time purposes, but it’s another perfect example of the movie giving the audience a moment to just breathe and be submersed in the world that the film creates. Plus the shots, the scope and especially the music are all stealer in this short but awesome flight scene. 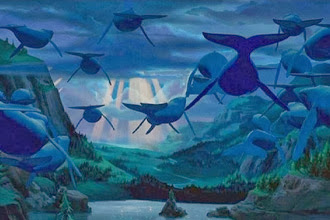 I’ve used a lot of Disney movies on this list and of all them, this segment from “Fantasia 2000” is the best by far. This isn’t just a visual marvel to behold on screen, it’s a very imaginative and even artistic segment. The whole scene revolves around a group of flying whales and while that may sound odd, it still matches the musicale piece of “Pines of Rome” beautifully. I especially love how this segment builds, first it’s two flying whales, then it’s tones of flying whales, their swimming through the clouds, the music builds along with it, it’s just an awesome sequence.

2. Sealing the Bond from “Avatar” Wow, now this was an experience I’ll never forget. Unlike every other flight scene mentioned on this list, I experienced this flight in 3D and IMAX. That more than anything transcended this awesome flight scene into a phenomenal experience. For the first time, I truly felt like I was experiencing the simulation of flight in a movie. The world of Pandora it also a visual marvel, complete with floating mountains, detailed landscape and some of the most unique looking flying creatures I’ve ever seen. This could have easily been my number one favorite, if it weren’t for the next scene.

Before I reveal my #1 Favorite, here are my most Honorable Mentions ... 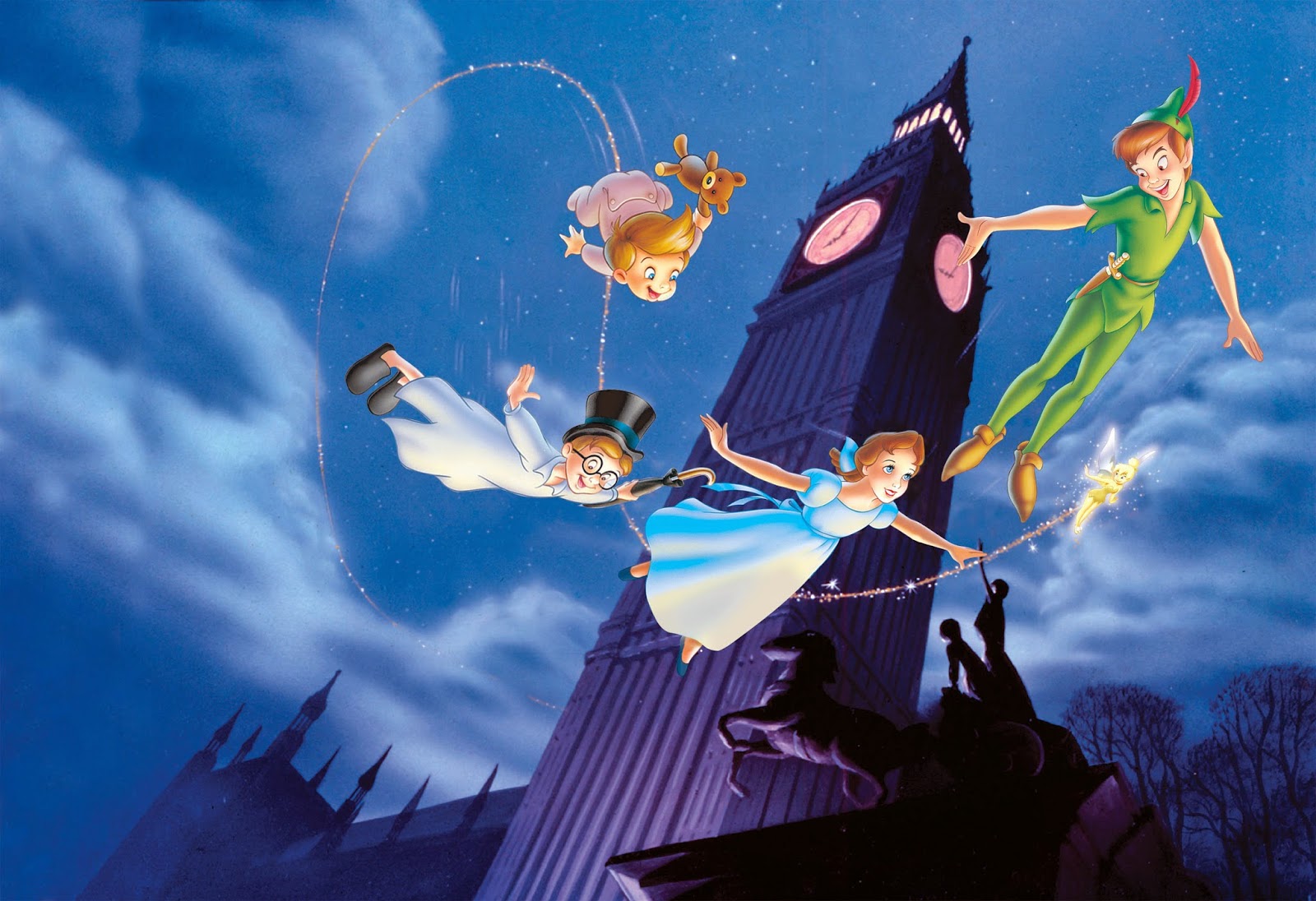 1. Dragon Riding from “How to Train Your Dragon” 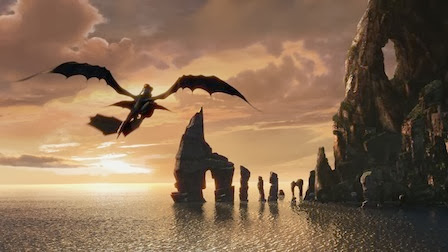 Only a year after “Avatar”, I never thought another movie could provide a flight scene as spectacular as the one in that film, but then “How to Train Your Dragon” came out and completely knocked “Avatar” out of the park. The plot revolves around a boy who’s teaching a dragon obedience, as well as learning how to fly him and when they go flying through the sky or through a cannon, you feel like your right there on that dragon. The 3D flying sequences in this film are true spectacles and the scenes themselves are just beautiful to look at. Not only is the cinematography breathtaking but the lighting is especially good, ranging from warm sun sets to cool nights full of glittering stars. Best of all, there’s not just one but several flight scenes in this flick and every one of them dose something different and awesome. This is one of those movies that’s meant to be seen in the IMAX, I mean it’s still a great movie regardless, but the flight scenes alone make this worth full price.