What Dreams May Come (1998 movie review) 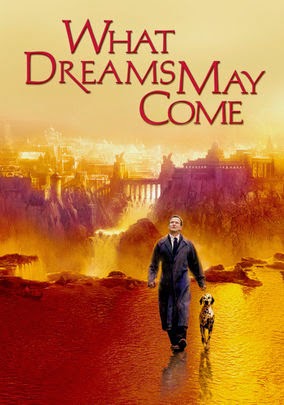 The afterlife is perhaps one of the most intriguing subjects ever, and an engaging concept for any movie. No one really knows what life is like after death, and even for those of us who believe in Heaven haven’t got a clue as to what it would be like when we get there. Over the years I’ve read many stories and seen many movies involving the afterlife including “The Five People You Meet in Heaven” and “Heaven is for Real”, each with their own take on what life after death will presumably be like. Now with the tragic passing of the great Robin Williams, I feel it’s only proper to review the 1998 motion picture “What Dreams May Come”, which also revolves around the afterlife. Before I get to ahead of myself, I want it noted that I’ll do a proper tribute to Robin Williams later, and maybe even discuss some of the statements revolving his death. For this post however, I’m only going to talk about the movie and its contents. Now with a title like “What Dreams May Come”, you may think this has something to do with Shakespeare, sense this is a direct quote from “Hamlet”, more specifically the opening of a soliloquy in the “Nunnery Scene” that began with the famous “To be, or not to be...”, but let me ashore you, this has no direct barring on either “Hamlet” or the writing of William Shakespeare. So, with all that cleared up, let’s talk about the movie.

The late great Robin Williams plays a doctor named Chris, who’s fallen in love with a woman named Annie. Together they raise a son and doubter, life seems magical and every day is a blessing until one tragic morning in which the children unfortunately die in a car accident. Now our lead couple is struggling with this lose and just when Chris thinks he can finally bring hope and love back to his wife, he to tragically dies in another freak car accident. From this point on, we follow Chris on his journey through death, at first he’s like a ghost, observing his wife on earth, and the impact that his death left on her. Then he finds his way to Heaven, or more specifically, his own personal Heaven that he created from his own life and dreams. Along his journey in the afterlife, he’s guided by an angel named Albert, played by Cuba Gooding Jr. who once new Chris back on Earth.

There honestly isn’t that much of a plot or flowing narrative, instead this film comes off as more of an experience in an unknown but magical setting, just with some talk about the meaning of life and family togetherness thrown in for good measure. Before I get lost in all the details of the film, let me first address the absolute best quality of the movie which makes it worth viewing. This film is absolutely breathtaking to look at, the scenery is so surreal, beautiful and vibrant that you just feel transported. The logic in the film is that every individual creates his own heaven, and in the case of Chris, he was very fond of paintings and art work back on Earth, so his version of heaven is like one big painting. The things Chris dose in Heaven is also very fun to watch, it’s like seeing a kid take control of his most magical dream. I especially love this scene when he wills himself to fly across the landscape. As the film goes on, we see many different interpretations of heaven from other desist characters, each with an astonishing look and feel that’s all their own. I love how detailed everything is, we actually get to a point where this feels less like Heaven and more like a magical fantasy world, with mermaids and people flying through the sky. Even if you’re not interested in the films subjects of life and death, the film is absolutely worth viewing, just to be transported to this magical world that the film creates.

The subjects raised in this movie are kind of hit and miss, some topics are really good, while others are kind of head scratching. The main point the film emphasizes is that when you find your perfect soul mate, the connection between the two never stops. A person may die but love never dies, you’ll still have that connection even in the afterlife. This is good on its own, but what really sells it are the performances from the cast. Robin Williams is of course an actor that just can’t do wrong, and when he’s paired with his wife played by Annabella Sciorra, the two bring out heartbreakingly effective performances. Cuba Gooding Jr. is okay as the angel but he just doesn’t stand out like Williams dose. That’s not to say that this is one of Robin’s absolute best performances but I always love how versatile Robin Williams is as an actor, he can be so sympathetic and stern but also really funny and charming. Well, this movie is no exception, he runs the whole gambit of emotions, nailing both the dramatic and cheerful performance that we all know and love from Williams. I also want to give some credit to the lovely Asian actress named Rosalind Chao who plays a character named Leona in this film. This is an actress that I’ve personally enjoyed in TV shows like “Star Trek The Next Generation”, “Deep Space 9”, and a phew others. While her role in this movie is short, it’s probably one of the most touching performances of hers that I’ve seen. 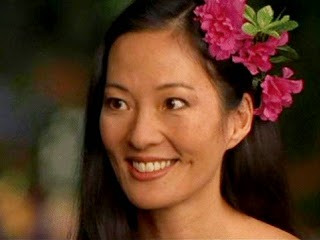 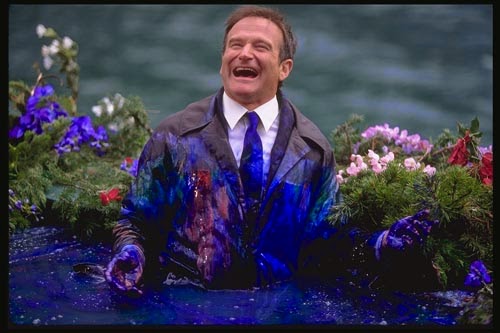 Unfortunately, now that I’ve mentioned her character, I need to address another point made in this film that really brings it down for me. Many stories of the afterlife will make some point that the image of your soul can be represented by the best parts of your life, it can take the appearance of you as a child or a middle aged individual, but this movie dose something else that I just don’t care for. When Chris goes to Heaven, he maintains the same form he had on Earth but every other angel he meets takes the form of someone else entirely. For example, the Asian girl Leona is eventually revealed to be Chris’s late daughter, she had taken this appearance because her father once spotted a flight attendant that was an Asian girl that he found attractive. So his daughter wanted to be as beautiful as that woman that her father liked. The movie also makes a clear point that it’s the specific flight attendant the father and daughter met that one time on a plain. Personally, I like to believe that God made us in his own image, and I just don’t understand why these characters would take the image of someone else entirely, especially strangers who already have their own respected image. It also gets really confusing near the end when it’s revealed that Chris’s late son took the appearance of a doctor that Chris respected back on Earth, and later we see that the soul of the real doctor took the appearance of yet another stranger, and it just makes the film feel needlessly complicated and even silly.

Both the tone and plot of the movie take a serious shift in the final act of the film. As Chris has been having a beautiful time in Heaven with his kids, his wife has been going through hell on Earth. Eventually, the wife takes her own life, and her soul is sent to one of the lower levels of Hell. Now Chris is determined to go down there and free her soul from the underworld. Some people may find it just a little too gimmicky that Chris’s soul can willingly leave Heaven and venture into Hell to rescue his wife, but for the sake of the movie, I’m not going to complain about it. I will say that even in the dark and gloomy setting of Hell, the movie is still very imaginative and impressive to look at. Aside from the actual gates of Hell, there really isn’t that much fire and brimstone, instead this films version of Hell is depicted as a cold and gloomy place where sinners continue to live their miserable lives, without even realizing that there stuck in this limbo for all eternity. There’s an especially eerie scene when Chris walks over a sea of bodies that are buried up to their heads, which are all still talking like they were back on Earth with no hope and no remorse.

Now I don’t mean to spoil too much of the movie, but the ending is another big problem that I feel needs to be addressed, so spoiler alert. As you’d expect, Chris dose save his wife from Hell and their both happily reunited with their children in Heaven. I feel that the movie should have stopped right there and ended on a high note, but unfortunately, both Chris and his wife don’t want to stay in Heaven with their kids and decide to be reincarnated as two children who are completely different from who they were before and meet under different circumstances. It’s also made very clear that only the parents are being reincarnated, while the souls of the children are staying in Heaven to wait for the day in which the parents die again. You’d think that the kids would want a second chance at life, especially sense theirs were cut short. What’s worse is that Chris tries to convince his wife that Heaven doesn’t offer the same thrill of falling in love, and that’s the only explanation given as to why they get reincarnated at the end. I just find it really hard to except that after battling the pain and struggles of Hell to save the soul of his wife, the two would be so willing to push their place in Heaven away and start life over again. It just makes the mother and father seem very selfish when you think about it. Now to be fair, there is a deleted scene on the DVD that gives a far better explanation as to why they should be reincarnated, but sense it was deleted, it doesn’t save this ending from being another week spot in the movie. 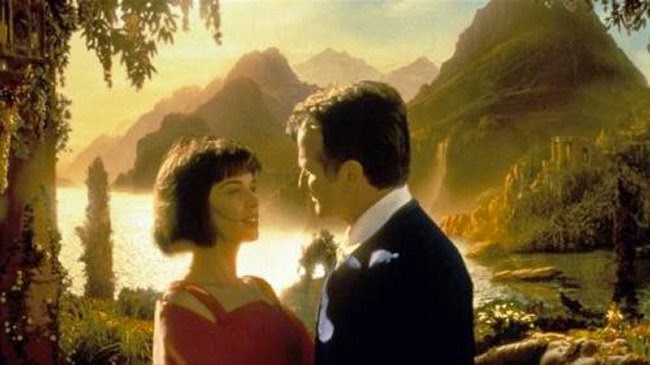 Overall, “What Dreams May Come” is far from perfect, the plot can get really clunky at times and there’s just one too many topics in the film that I just don’t support, particularly the angels taking the appearances of other people and especially the ending. However, despite all the films problems, it’s absolutely worth seeing. It creates a magical vision of life after death, which is nothing short of phenomenal to experience, and there is at least one or two thought provoking statements made in the film.  For all the films imagination, beautiful imagery and strong leading performances, I’d say that the film is certainly redeemable from any of its short comings. 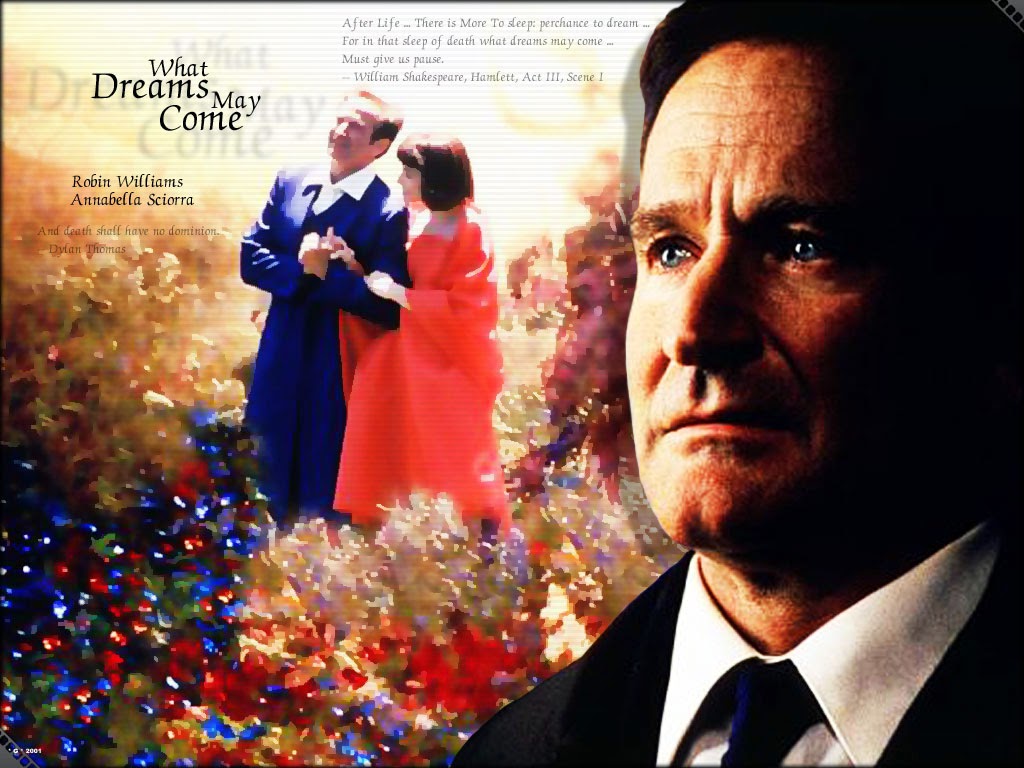