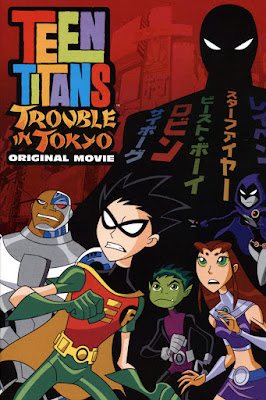 This month I've been reviewing the animated 2003 TV series “Teen Titans”, and basically have been describing it as not only my favorite Superhero show, but my personal favorite animated TV series I ever had the privilege of growing up with. After all these years it’s still one of my favorite shows, animated or not. The one downside is that the show was cancelled before it could get proper closure. The last episode closed the series on a rather depressing note, with several questions and plot threads left unresolved. So it seemed that my favorite series was done for good, just with an awful taste left in my mouth. Then much to my amazement, it was announced that the show would be given one last chance to shine with an animated direct to TV movie. Initially there were going to be at least three movies based off the “Teen Titans” show, but for whatever reason we just got one film in 2006 titled “Teen Titans: Trouble in Tokyo”. This was it, one last chance to give my favorite animated Superhero series some finality, or at the very least end the show on a more positive note. Dose it live up to the qualities of the series, or is this about as standard an outing as they get ... honestly, it’s a bit of both. 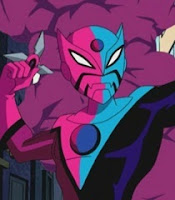 Just a quick recap, the Teen Titans are a team of young hero’s that protect Jump City. The team mostly consists of smaller side-kick characters like Robin, Star Fire, Best Boy, Cyborg and Raven. Our movie is presumably set after the events of the final episode, but it's very self contained and really doesn't follow-up on any events from the show. We begin with the Titans Tower under attack by a heavily armed assailant called Saico-Tek, who’s under orders from a mysterious villain in Tokyo. This prompts our hero’s to journey to Japan, discover who wants them dead, and bring him to justice. Their investigation leads to an urban legend revolving around a villain named Bruchogun, who may or may not still be alive. Also upon arrival, our hero’s meet a team of Tokyo troopers, lead by Commander Daizo who insists that Bruchogun was a myth, and that the Titans should leave at once. This news divides the team as Robin is determined to find his foe, while the others want to take a much needed vacation. Star Fire in particular wants to take advantage of their time, and confess her feelings to Robin, who she’s been in love with sense the beginning. Meanwhile, lurking in the shadows of Tokyo is their mysterious adversary, who aims to turn the city against our visiting hero’s. Robin is framed for murder, the troopers start hunting them down, and several other monstrous villains start coming out of the woodwork. Thus the chase is on as our hero’s try to clear their name, and unravel the mystery of Tokyo’s shadowy super-villain. 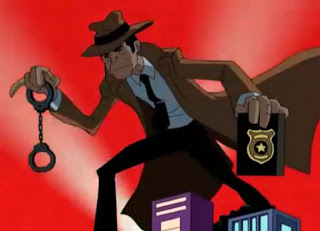 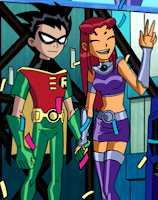 In short, there’s nothing too special about the plot, as it’s basically another story of Robin rediscovering what it means to be a hero, and there's an admittedly obvious reveal as to who the real bad guys are. It’s still engaging to watch, and is laced with several details that make it appealing for us long time fans of the show. Robin was my second favorite character of the series behind Raven, so I’m all for a movie dedicated to his character. One minor issue is that this felt like season 1 Robin, not the hero who’s grown and matured over five years. Another downside is that the other characters like Cyborg, Beast Boy and Raven are given much less to do. For a “Teen Titan” movie, it really should have revolved around the team as a collected whole instead of one select character. 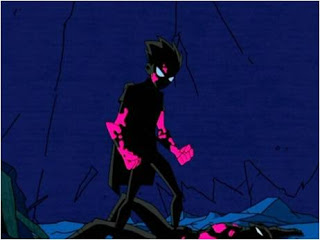 I wouldn’t mind too much, except this is my last chance to spend time with these characters, and I just feel that they weren’t all given proper involvement. Let me put it this way, if I told someone that Raven is one of my top three animated characters of all time, you really wouldn't get a good picture as to why from this movie alone. The biggest problem by far is that an animated movie was a perfect chance to bring some much needed closure to some of the shows plot threads that never got resolved. Instead the movie gives us an average self-contained story that would have made for a perfectly passable episode. On that note, the film definitely feels like a 20 minuet episode from the show that got stretched out to movie length. As a result, there’s a lot of filler, and some repetitive detours. Most disappointing of all is that the comedy isn’t that great. By contrast, the comedy from the show was outstanding, and still cracks me up as an adult. The best comedy from the show came from how our hero’s interacted with each other, but that same charm isn’t present because our hero’s are mostly separated throughout the whole film. There is at least one stand out funny moment with Beast Boy singing a special version of the theme song, and it's very amusing. 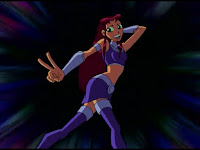 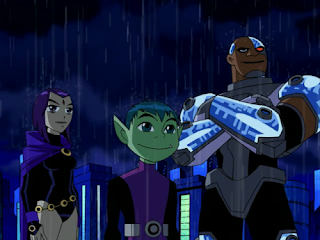 Now with all that said, I’m still very glad I have this movie as an add-on to the series. The shows overall charm and appeal is still present in the movie, and it’s plenty engaging to watch. The action scenes have a lot of energy, and some fairly well choreographed animated fighting. I’m so glad it stuck to its roots, utilizing the exact same animation style, with no added CGI fluff. The only difference is that the artistry is more detailed, as well as more colorful. The show was already quiet colorful, but the movie is like an explosion of bright color. It really helps give Tokyo its own identity and atmosphere. Now the show already had some influence from other Japanese works, even utilizing a theme song by Japanese artists, so the movie felt right at home with its Tokyo setting. I loved spotting all the little details, and references to other Japanese works. For example, there’s a scene when a disguised Robin steals a high-tech motorcycle, gets into a car chase on the freeway, and it feels like a visual call back to the 1988 anime “Akira”. Then there’s the obvious “Godzilla” reference when our hero’s battle a giant lizard monster, which even walks like a guy in a rubber suit. 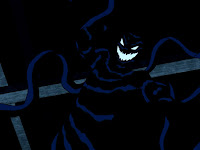 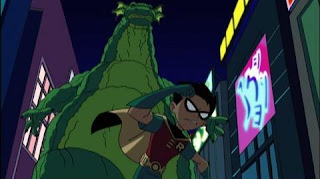 The best thing about this movie by far is Robin’s romantic relationship with Star Fire. This is one case in which the movie actually gave some much needed closure to something from the TV series, and it’s extremely satisfying. This relationship between Star Fire and Robin was always one of my many favorite aspects of the show, but it was always very light. We knew they had feelings for each other, but they never committed to a relationship of any sort. In this movie, we finally see them getting close, confessing their feelings, and starting a real relationship. It’s also the only time the movie acknowledges an event from one of the episodes. In the origin episode titled “Go” we see how Robin and Star Fire first meet through a kiss, and the movie fills us in as to why that happened, so she could learn English through lip contact. Now Star Fire wants to kiss him for real, which is teased several times through the film until the ending in which they share an admittedly cliché, but oh so beautiful slow-motion kiss in the rain. As a long time fan of the show, this was the one thing that gave the movie its relevance. Aside from their big kiss, the two actually have some really good scenes together, and I just love the little details on display. There’s a great scene when the two have an emotional conversation on a rooftop, revolving around whether or not their relation gets in the way of their responsibilities as hero’s, and it’s moments like this that allow me to forgive the films average plot. 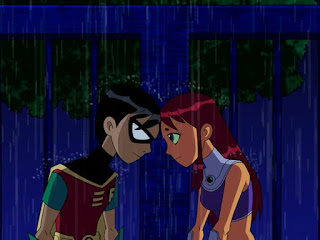 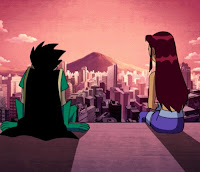 Another one of my favorite stand out moments is a flashback revolving around the origin of the mysterious villain Bruchogun. We learn that he was an artist who tried to bring his drawings to life through some form of Japanese dark magic. As a result he was transformed into an ink creature with the ability to create various panted warriors and monsters at will. This scene is just dripping with a haunting atmosphere, and some gorgeously dark imagery. I sadly have to confess that the villains in this movie were mostly underwhelming. That’s not to say the villains are “bad”, there just very average and don’t leave an impression. The TV show featured some of my all time favorite super villains from any animated program I've ever seen, so I expect a movie to give me more when set to those high standards. I will say that some of the designs are kind of cool. The assassin Saico-Tek looks like an aquatic robot-ninja, which is kind of unique, and really like the design of the evil cat-girl. 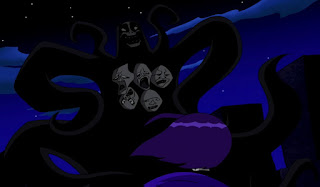 Of course we have the obvious twist reveal that Bruchogun wasn’t the real villain, he was a slave to the police commander, who was taking credit for apprehending the very criminals he created. This was a predictable twist from the start, but it at least has some relevance to the theme of the movie. We have Robin, a hero rediscovering what it means to be a hero, versus a villain parading himself as a hero, which gives them some engaging interplay. The climax is a big action packed brawl with giant monsters and our hero’s fighting armies of painted warriors. It’s admittedly not their greatest final battle, but the music is riveting, in fact, it’s the best fight music of the whole series. 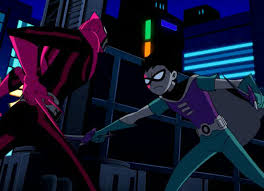 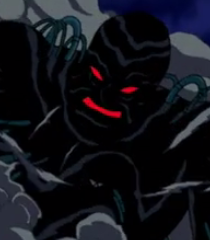 So, dose the “Teen Titans” first and only movie live up to the standards of its series, or even hold up after all these years? Well personally, I can’t help but adore this movie. It’s still the same charming characters, and it’s still the same tone and feel I love from the show. It’s also a positive note to end the classic series on then the joyless final episode was. Plus, it was just very satisfying to see Robin and Star Fire finally tie the knot. Unfortunately, there’s not enough here to recommend to anyone not familiar with the series. While “Teen Titans: Trouble in Tokyo” can be very action packed and fun, it’s still not strong enough to win new fans for anyone that hasn’t seen an episodes of the show. Let’s compare this to a really great TV show adaption like “Batman Beyond: Return of the Joker”. If you’ve never watched “Batman Beyond”, it won’t change the fact that “Return of the Joker” is an excellent movie that can be viewed on it's own, and I personally think it's one of the greatest Batman movies ever made. Even though I have nostalgia for “Teen Titans: Trouble in Tokyo”, I can’t call it anything special, and I feel that the show set the bar high enough for a truly great movie. If you’re a fan of the show, you’ll like this fine, but if your just looking for an exciting animated superhero film, I’d actually recommend either of the current stand alone Teen Titan movies from Warner Brothers, like “Teen Titans: The Judas Contract ” or “Justice League vs the Teen Titans” instead. With that said, I'll always love my "Teen Titans", and while the movie isn't perfect, it's still a more then satisfying add-on to the series. 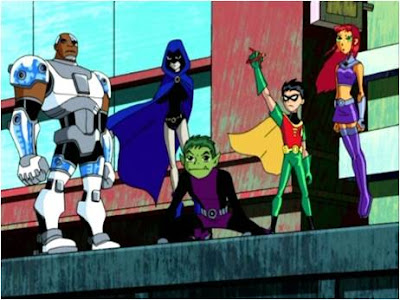