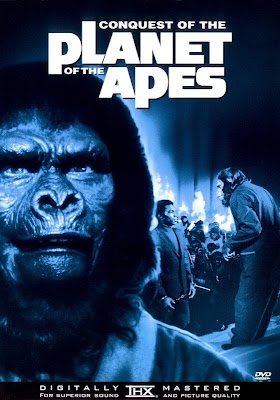 Now we come to the forth entry in the long running "Planet of the Apes" series, the 1972 sequel titled “Conquest of the Planet of the Apes”. I must confess, of all eight installments in the series, this one is my least favorite, not just because it’s bad (which it certainly is) but also because it’s just so unpleasant and such a waste of time. 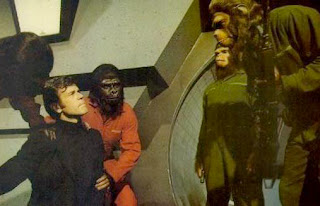 The plot goes like this, it’s been almost twenty years sense the events of “Escape from the Planet of the Apes” and some strange virus has killed of all dogs and cats on the planet. Now humans have resorted to taking in apes as pets, which then lead to them being turned into slaves. Now Twentieth Century Americans act like Nazi’s from 1940’s Germany, and apes are the pore victims. Meanwhile, the circus trainer Armando (played again by Ricardo Montalban) has raised the ape child named Caesar that was born from Cornelius and Zira, who both died at the end of the last film. Once Caesar see’s humanity’s disgusting underbelly and harsh way’s, he becomes convinced that humanity is evil, so he rallies all the ape slaves together in one big revolution against the human oppressors.

Now by that plot description, you’d probably think that this movie sounds really awesome, it’s a darker story and a big turning point in the series as we see firsthand how the apes overthrow the humans. However, while the premise sounds exciting, the writers don’t build a story around it, or at the very least, not a very good story. I’m not going to lie, there’s hardly anything going on in this film, most of what we see in this movie are apes getting tortured, apes getting poorly mistreated, humans acting like complete idiots and painfully long, drawn out scenes of characters in silly gorilla costumes walking around silly sets. It just gives you this very empty feeling, like you’re not gaining anything from watching this. There’s no thought provoking questions and the way the film depicts our culture is absurd. Everything is just so damn narrow sighted, humans are officially evil and apes are officially victims, no debate on who’s in the wrong, no care about humanity even though there trampled underfoot in the end and in a film like this, you should absolutely care about the humans in some general way.

The characters in this film are nothing special, the lead ape Caesar is a complete bore. Nothing about him holds your attention and his mannerism at times can get over exaggerated, while other times, he’s just dull as a rock. Ricardo Montalba’s character Armando is the only one you care for, however he’s shamefully executed and doesn’t offer anything useful in the grand scheme of things. Remember in my last review, how I appreciated how realistic and down to earth the villain was, well, this is the complete opposite. The villain in this movie is an over the top, stereotype bad guy who might just have the stupidest motivations I’ve ever heard. He claims that he and the rest of humanity deliberately treat apes badly because apes represent the darkest side of human evolution. Well if that’s the case, then why is humanity acting so much more savage and cruel against them, plus, if apes represent our most savage form of evolution, why turn them into slaves, that’ll only provoke them in hating humanity even more.

The movie doesn’t gain any momentum until the very end, when all the apes get lose and start an uprising. But even this is only mildly exciting because the action is nothing special, just a bunch of silly costumed characters running around, making annoying sounds and pushing other people over. It actually gets boring after a while, the music gets especially annoying and the camera work comes off as a random mess at times. The movie ends with Caesar giving this really big speech about how his people will begin birth of the planet of the apes. This should have been the big highlight of the film and while the speech itself is good, the delivery is boring, bland and not all that engaging.

Overall, I just feel like there’s nothing worthwhile about this film, it moves at a slow pass, it has a very joyless overtone and a very empty plot. Hard core “Planet of the Apes” fans may appreciate it more and may even consider it to be one of the most intense and tragic in the series. I’ll admit that at the very least it progresses the story in a way that’s true to the source material but the film overall just doesn’t do anything for me. 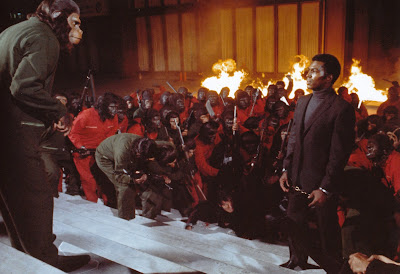 I give “Conquest of the Planet of the Apes” 1 ½ stars.