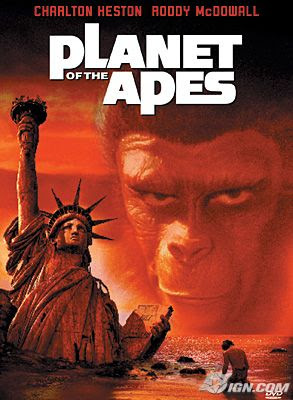 Based on the 1963 French novel “La Planete des singes” by Pierre Boulle, “Planet of the Apes” remains one of the most popular and beloved Sci-Fi’s of all time. Empire Magazine even placed it among the 500 best movies ever made. However, anyone expecting a big, action packed, Sci-Fi adventure, with humans battling apes might be disappointed with this film. That’s not to say that the film isn’t exciting to watch, it’s just that this movie isn’t popcorn entertainment the same way most Sci-Fi’s are. This is a smart movie that asks interesting, even thought provoking questions about our society and delivers an imaginative, yet honest warning story about a possible world gone upside down. Best of all, this film never lets it’s social commentary get in the way of the main characters or the story at hand. 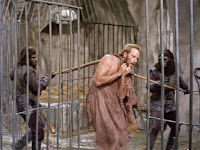 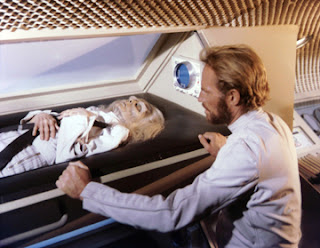 The plot goes like this, a small team of astronauts are testing light speed, in the span of seven hundred years they’ll have traveled across the galaxy in six months. However, they stay in hyperspace for too long, up to the point where Earth time has passed for 2000 years. More problems ensue as their space ship crash-lands on what appears to be a disserted planet. It’s not long before the team stumbles upon a society in which apes have evolved into creatures with human-like intelligence, speech and have become the dominate spices of the planet while the humans are mute creatures wearing animal skins. The crew gets killed off, all except for one named Taylor, who is captured by the apes. He befriends two chimpanzees named Zira and Cornelius, who try to learn all about him, but an orangutan named Dr. Zaius already knows that he’s an early stage of intelligent man that once dominated apes and refuses to let history repeat itself. Using a false religion, he tries to convince the other apes that he’s an unholy apparition that must be executed. But the two chimpanzees later free Taylor and set off across the planet to find answers of his being here, which leads to the terrifying realization that this planet is indeed Earth, thousands of years in the future and through some mysterious reason, mankind doomed itself, which lead to all of this.

I’m not going to lie, most of this movie is spent with Taylor being held prisoner by the apes, going on trial and getting tested on by the ape doctors, it’s not until the third act of the film that he and the chimps go on their little journey. This can make the film come off as boring to regular viewers but if you pay attention to the characters and the subjects established in the film, then it can be quiet engaging. The ape makeup is also quite impressive for the time and won the movie an academy award. Charlton Heston (famous for playing Moses in “The Ten Commandments”) plays Taylor, and he’s great in the role. Something about his mannerism feels genuine and even though he can be a bit of a hot head, he still holds your attention. I especially love his voice, no one else can say the line “Take your filthy hands off of me, you Damn dirty ape” with as much class as him. The two chips, Zira and Cornelius are also really good characters and become the most frequent, reoccurring characters in the series. The villain, Dr. Zaius is someone that you really grow to hate, every time he does something against Taylor, you just want to punch him. Then there’s this one human girl named Nova who doesn’t say anything throughout the entire film and doesn’t even contribute anything to the plot, which makes her less of a character and more for fan serves. 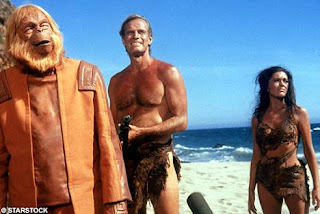 One element that personally holds my attention is the films unique atmosphere and tone. Right from the opening, it creates a genuinely eerie feel and the music composed by the late great Jerry Goldsmith has something of an avant-garde quality, using odd percussion instruments. I like how they make this planet a very mysterious one, with odd lightning storms that only form in one section of the planet, yet there’s no rain, odd lunar activity and yet there’s no moon, rows of scarecrows that divide one half of the planet, even areas that the apes are forbidden to cross into. A lot of the sets and locations alone can create this really alienating mood, most of the buildings seem to be made of rock and twist at weird angles. The cinematography in this film is spectacular, and I really like the scale that they give to the landscape, and this was before wide screen became so popular. Scenes from the opening of the film were shot around Lake Powell, while other scenes were filmed on beeches between Malibu and Oxnard in California. I also like how there’s no clear answer to what accrued all those years ago, leading to apes becoming the dominate spices of the planet.

Of cores the ending is one of the most famous in film history, as Taylor and his mute girl friend go off on their own and discover the remains of the Statue of Liberty, it’s such a popular image and left quiet an in-packed. Sure now days, disaster movies like “The Day after Tomorrow” and “Clover field” put all their marketing into the destruction of the Statue of Liberty or other national land marks, but back then, it was so sudden and frightening to see such a sacred landmark in ruins. On its own, “Planet of the Apes” still holds up over the years. The questions it raises about our culture can still get people thinking and it’s warning of humanity dooming itself is still quiet effective. Audiences that love classic, old, Sci-Fi’s should definitely give it a watch. I still think it’s good, not one of my favorites or anything, heck not even a film that I’d watch that often but worth checking out, as long as you go in with the right mind set.