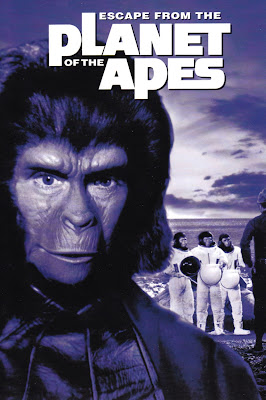 Time to journey back to the Planet of the Apes ... well, sort of. When it comes to the four sequels that are directly related to the original classic, the 1971 sequel titled “Escape from the Planet of the Apes” is easily the best and my personal favorite of the first five classic “Planet of the Apes” movies. Now you’re probably wondering how they could possibly continue the story after the events of “Beneath the Planet of the Apes”, considering that we saw Taylor activate the dooms day bomb that destroyed the entire planet. Well, the explanation isn’t entirely convincing but it works just enough to progress the story. Basically, the two hero apes from the first movie, Cornelius and Zira found Taylors downed spaceship, used it to escape the planet before it was destroyed and where then sent through a black hole that sent them back in time to the mid 1970’s. I’d certainly like to know how they found Taylor’s ship after it sunk to the bottom of the sea or how they learned to pilot it, but honestly those little details don’t matter because the following story is excellent.

Now Cornelius and Zira have found themselves in the exact same situation that Taylor was in from the first film, with humans being the dominate species on the planet and apes are inferior. However there not treated with hostility right away, in fact society welcomes them with open arms. They almost become like celebrates, people give them fine clothes, a good place to live and even give them official tours of their world. They make especially strong friendships with two human scientists named Dr. Lewis Dixon and Stephanie Branton, who become their closest alies and help the apes find their place in the world. All seems to be going just fine but you know deep down that it’s not going to last. 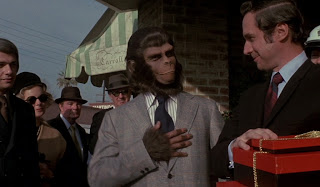 Their house of cards start crumbling when they get the attention of the President’s Science Advisor named Dr. Otto Hasslein, who learns that Zira is pregnant. Fearing for the future of the human race, he drugs Zira with some kind of truth serum that forces her to reveal all secrets that the two of them have been holding back from everyone else. Secrets like the inevitable destruction of the planet, what really became of Taylor, how the apes treated other humans, etc. It’s enough to allow Dr. Otto to confine both apes in prison and he’s also given the right to abort Zira’s baby. Our two doctors aren’t about to allow this, so they help Zira and Cornelius escape, and help them to find their way, now that their fugitives on the run. You could easily right Dr. Otto off as the villain of this film, he’s certainly fits the role of the jerk that gets his comeuppance, but his actions aren’t entirely evil, he’s just paranoid about the future and it’s forcing him to take drastic measures. 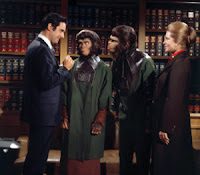 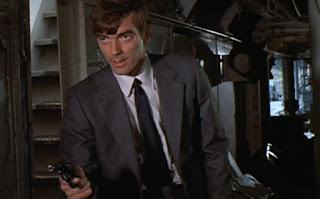 The overall plot may seem like a cut and pace of the first movie but there's just enough smart twists and turns that make it stand out, and honestly this story makes changes that are far more interesting and more character driven. I especially love the concepts, themes and honest moral questions that this movie asks. With the arrival of the apes, humanity is now aware of their inevitable fate, the dominates of ape kind and the destruction of the planet. All it takes to stop this from every happening is for the humans to kill three innocent characters. This raises one of the most important questions ever established. Is it right to take the lives of just a small few innocent and defenseless lives to save the lives of millions? There’s a scene in the film where Dr. Otto and the president have an excellent conversation on this topic. The president even uses this as a metaphor, “If I went back in time before The Holocaust, would I have the right to murder Adolf Hitler when he was just a defenseless child, or would that action make me no better than he was.” Its statements, questions and concepts like this that give the movie a heart and it just makes you care more for the outcome.

I’ve always liked the characters Zira and Cornelius and in this film it’s very easy to care about them as they go on their journey. You want them to find sanctuary, you want them to be accepted and when they get pursued by the government, you really want to see them escape. It’s also very interesting to see them going through what Taylor experienced in the first film and it gives these characters the chance to peer through the looking glass and see what kind of monsters they were like to humans. They also make friends with a circus owner played by the always fantastic Ricardo Montalbán, who has some of the best and most touching lines of dialog in this film.

One plot point established in this film that will become a key part of the series is that while humans may harm other humans, apes will not harm other apes. This statement honestly doesn’t make much sense considering that we see a gorilla strangle a chimpanzee to death in the opening of the film, but I’ll let that little plot whole slide for now. Everything leads to an exciting climax with both apes trapped in a ship yard as the authorities come down to assassinate them. However, Zira apparently had her baby and left him in the hands of the circus owner, which will set the stage for the rest of the series. 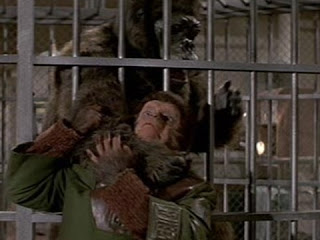 “Escape from the Planet of the Apes” is a very underappreciated sequel in my opinion, critics seem to like it just fine, but it’s never been acknowledged as a truly great sequel that might be superior to the original. Sure, it’s not a land mark film but it is still a very good sequel that dissevers more recognition. The plot manages to stay exciting while giving use a story that’s more character driven and on some small level, it’s genuinely touching. For all this and all the themes and deeper concepts that the film establishes, and I honestly think it’s better than the original.

I give “Escape from the Planet of the Apes” 4 stars.